I was interviewed by Robbie Buck on ABC Radio Sydney on the day that the postal survey result was announced. You can listen to the segment below.

During the postal survey shenanigans, I was interviewed by Anthony Lekkas (from Triple Bi-Pass on Joy 94.9) for Bent TV. You can probably tell we had a fun time chatting. Check them out below.

I wrote an essay on marriage equality for Huffington Post Australia. I will be interviewed about my essay on ABC Radio Sydney on Wednesday 15 November, so please tune in here. 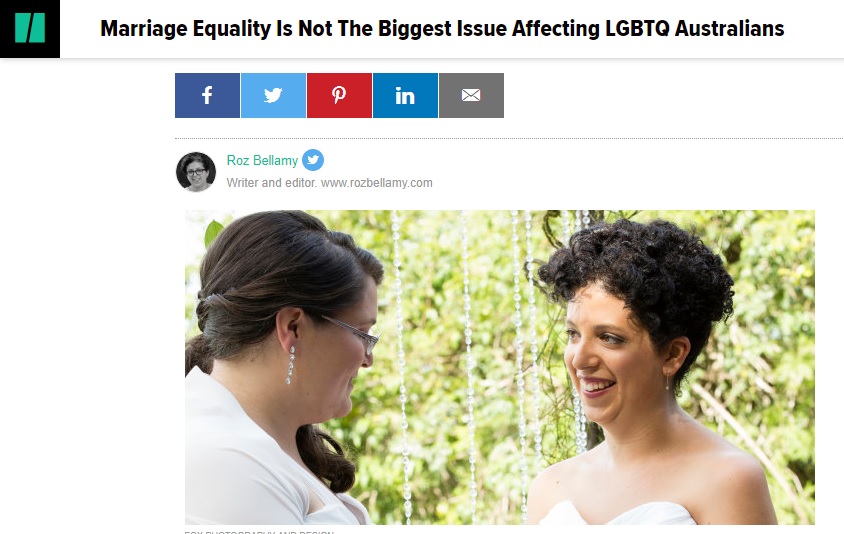 Today, I am thinking about my beautiful friend, Jenny Green, who died in November 2015. I wrote about the supermoon, an odd, rare phenomenon that helped me observe Jenny’s death and work towards accepting it. This piece was originally published by Urban Walkabout, which unfortunately went into voluntary administration so the piece is no longer available online. You can read the original piece below.

The Supermoon, Grief and a Turbulent Month

According to NASA, our planet will see “the closest full moon to date in the 21st century” on November 14. I have experienced the uneasy combination of terror and excitement in the lead up to this supermoon. It will be one year since my friend, Jenny Green, died. Since I haven’t wanted to deal with my grief, I have focused on the moon.

Astronomers have advised the public where to gather in order to observe the supermoon. Whether people are planning to capture it using expensive tripods or a phone camera, there are a few ideal vantage points. These include east-facing beaches, mountains, tall buildings and hills.

Jenny loved beaches. Of all the beaches in the world, she was insistent that the best is Coogee Beach in Sydney. She scoffed if you dared to make the argument in favour of Bondi Beach, Nielsen Park or, God forbid, any Melbourne beach. Her dream was to listen to Tchaikovsky’s Violin Concerto in D Major at her favourite place, which was Coogee Beach at sunset, and “swoon with the sheer ridiculous beauty of it all.”

When I found out that the supermoon would coincide with the anniversary of her death, I laughed. It’s always easier to laugh, to live in denial, and to get angry, than to cry. I suppose that’s why in Kübler-Ross’s five stages of grief, anger and bargaining occur before depression. I laughed because Jenny would have appreciated the symbolism and metaphor so much. She would have quoted poems and songs, without needing to Google the lyrics, and effortlessly braided them together into an astounding post, shocking her Facebook followers with the obscenities and the stark beauty of her words.

Brisbane poet and writer Kathleen McLeod also connects the super moon to our shared grief over Jenny. As she wrote on her blog, “The supermoon is tonight and here you are, still illuminating all of us. Life is beautiful and terrifying and weird.”

The moon features in so many religious and spiritual customs. It is tied to fertility, femininity, mysticism and new beginnings. Leonard Cohen, who died a week ago on 7th November, sang about the moon, as did Jeff Buckley and numerous other incredible poet song-writers.

This morning, a friend told me Cohen died earlier than the date his death was announced in the media. He was buried before Trump became President Elect, which means that he left the world before it changed so drastically.

This brought me a deep sense of calm, which I don’t completely understand. Social media has encouraged society to analyse everything through a microlens, but grief interferes with one’s ability to participate in these obsessive new rituals. Instead, sometimes all that a mourner can do is focus on loss, and death, and cycles of life; we can only navigate the personal, with little space for the political.

Then again, Jenny taught me that there was always room for both. It feels so fitting that this date I have been dreading coincides with the supermoon. This unusual natural phenomenon lets me pause and contemplate nature and life. It interrupts the regular media schedule of fear, with scientific facts, natural beauty and photography tips.

As people gather at sunset tonight, whether they’re picnicking on a hill, or at the beach listening to classical music, drinking gin, and skinny dipping, which would have been Jenny’s choice, I hope the moon brings a sense of peace and calmness. Recent events in the world have left so many distressed, disoriented and fearful. When we peer up at the sky tonight and see the moon looking bigger and brighter than it has since 1948, and won’t again until 2034, I hope we can appreciate the beauty of the natural world. I hope that for a brief moment we can let go of everything – even the science and the facts – and just let it be magic when we need it the most.

Earlier this week, The Vocal (Fairfax) published my tongue-in-cheek letter to Senator Eric Abetz, which I wrote in response to his comments that we should celebrate people who come out as heterosexual.

Of course, I completely agree with the Senator, but I just had a few questions for him before we start planning the hetero pride celebrations! 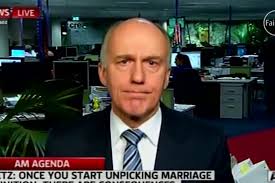 Why I agree with Senator Abetz about the need to celebrate heterosexuals, with a caveat

Recently, Tasmanian Senator Eric Abetz made some controversial remarks at the Hobart book launch of Stealing from the Child: the injustice of ‘marriage equality’. The book was written by the Australian Marriage Forum president, Dr David van Gend, and has the support of the Australian Christian Lobby, including lobbyist Lyle Shelton.

I decided to listen to Shelton’s interview with Dr van Gend on the ACL podcast, even though it was difficult, in order to understand his book and political views a bit better. It was pleasant enough to listen to, at first, since the two are good friends. They laughed as they discussed whether Northcote is “hippy” or “hipster”, and Shelton teasingly called Dr van Gend a “provocateur” for his choice of book title.

I tried to overlook the fact that both of these men have been making offensive and disturbing comments lately, as it wasn’t as bad as I expected. They referred to marriage equality advocates as their “friends in the same-sex marriage movement”. They were careful to clarify that all of this is “for the child” and that they are just “trying to help people think about the consequences” of changing the definition of marriage.

To my surprise, Shelton turned out to be a rather talented book critic. He described how compassionate and kind the book is, telling Dr van Gend, “You bring the bedside manner of a sensitive family doctor to this very complicated and divisive debate.” He also praised the writing itself, saying “You have a beautiful turn of phrase”. That may be true, but I didn’t love all the phrases that were about to come out of Dr van Gend’s mouth. Although the two men sounded friendly and approachable, shit was about to get real.

“We love all our same-sex attracted neighbours and family and friends, it’s not an issue, they can live as they choose, they just can’t choose a motherless and fatherless life for their future children,” Dr van Gend said, having reminded listeners of his authority on these matters, as both a GP and a father. “They can’t choose to impose that radical LGBT sex education,” he added.

As the podcast went on, it used anyone and anything to prove that non-heterosexual people should not get married and raise children. They referred to a variety of people, including a man who “used to live as a gay man” and a woman who was raised by lesbian mothers but agrees that children need both a mother and a father, to reinforce their argument.

Rather than concerning ourselves too much with Dr van Gend and Shelton, who are not federal politicians, I think it is time we focus on Senator Abetz’s remarks at Dr van Gend’s book launch.

“Ever thought why there is no celebration for those that decide to go from the homosexual to heterosexual lifestyle? Are they not honest? Are they not coming out as well?” Senator Abetz said. “And that is just one of the examples of the one-way traffic and bias from the media.”

I decided to try to counter some of this one-way traffic and bias by responding directly to Abetz’s questions.

Yes, Senator, I agree that there is room to celebrate people coming out as heterosexual.

Before we start ordering the blue and pink gender-conforming decorations, or determining which musicians are straight enough to perform at heterosexual coming out celebrations, though, there are a few points I think we need to discuss. And because it is so unlikely that Josh Manuatu, your staffer and Development Director of the Federal Young Liberals, who happens to be an out gay man, will put us in touch, I thought I would address this publically.

If this is not possible, then please refer to the additional questions below.

Once you respond to these questions, I am more than happy to help plan the first celebration. I know so many amazing, talented, hardworking and beautiful people – all colours of the rainbow – who could help throw a hell of a party.