I was on a panel called ‘Writing With Resilience‘ at EnQueer Festival, Sydney’s first queer writers’ festival on Saturday 6 November 2021.

I spoke at Editors Victoria on 25 November 2021 about writing and editing work on gender and sexuality and some the challenges for editors.

I was on a panel with the amazing Lur Alghurabi, Suzy Garcia and Clare Millar at the Editing Micro-Festival on 26 November 2021. Check out the podcast of our conversation here.

I was on a roundtable at the NonfictioNOW Conference in Wellington in December 2021.

I guest lectured at RMIT University on magazine editing and publishing on 15 October 2021.

I performed a piece about bisexuality and identity at the Melbourne Bisexual Network on 14 October 2021.

I presented at the International Auto/Biography Association Americas conference “Stories of Change, Stories for Change” on 1 October 2021.

I was on 3CR’s show ‘In Ya Face’ on 30 July 2021 speaking about my book deal and about attending Tin House’s 2021 Summer Workshop. You can listen here.

I was on a panel for the Emerging Writers’ Festival‘s event ‘Storming the Stage’ on 18 June 2021. You can watch the recorded event on YouTube here.

I was writer in residence in Moreland City Council’s Making Space program throughout March 2021.

I ran a workshop for 14-18 year olds at The Story Intensive (a collaboration between Writers Victoria and and Melbourne Young Writers’ Studio) on 20 January 2021.

I was on the keynote panel and also ran a workshop on editing an online publication for the National Editors and Writers Conference (NEWS) 2021.

I ran a festive season community check-in for Thorne Harbour Health on 23 December 2020.

I performed at the Melbourne Fringe Festival on 12 November 2020 in an event called ‘Let Me Get Something Off My Chest’.

I was on a panel at the Feminist Writers Festival 2020 titled ‘Where is the Queer Writing?’ in October/November 2020.

I ran a workshop for Thorne Harbour Health on Found Poetry, on 21 October 2020.

I ran a workshop for Thorne Harbour Health on Journaling for Wellbeing on 7 October 2020.

I presented at the Gender, Sex and Sexualities Conference at Flinders University (online) on 23 September 2020.

I appeared on a panel for the Sydney Jewish Writers Festival with Benjamin Law and Hayley Katzen on 14 September 2020. You can view the event here.

I ran a workshop for Thorne Harbour Health on Creative Ways to Look After Your Mental Health on 19 August 2020.

I ran a workshop for Thorne Harbour Health on 12 August 2020 called Community Check-In.

I ran a workshop for Thorne Harbour Health on 9 July 2020 on Navigating Relationships and Friendships During COVID-19.

I ran a workshop for Thorne Harbour Health on Creative Ways to Look After Your Mental Health on 11 June 2020.

In June 2020, I was a guest lecturer on Online Publishing for La Trobe University’s Editing and Publishing subject.

I ran a workshop on using life writing as reflective practice for pre-service teachers at Melbourne Polytechnic on 20 May 2020.

I was a guest on Dramageddon, a queer post-apocalyptic podcast by Jean Tong and Lou Wall produced by the Queen Victoria Women’s Centre, published by Broadwave and Recorded at Castaway Studios. Check it out here!

I performed in the One on One: An Instagram Live Storytelling Event on 1 May 2020. You can watch my storytelling here!

I spoke to Mia from A Seat at the Table, Kehilat Kolenu’s podcast, on 15 April 2020. You can listen on Spotify or Apple Podcasts.

On 14 March 2020, I read from the essay I wrote for Matters Journal issue four at their wonderful launch!

I performed at a Purim fundraiser party on 10 March 2020. All ticket proceeds went to Olive Kids, a foundation that improves the lives of Palestinian children in Gaza.

I appeared as a guest on Sally Goldner’s ‘Out of the Pan’ radio show on 3CR Melbourne on 23 February 2020. Listen to the show here.

On 18 February 2020, I was interviewed by the wonderful team on Tuesday Breakfast at 3CR Melbourne. Listen to the interview here.

I appeared on the panel ‘Jewish, Queer, and Proud – Bringing Jewish Values Into Queer Communities and Queer Values into Jewish Communities’ at the Leo Baeck Centre for Progressive Judaism on 9 February 2020.

On 13 December 2019, I moderated the Queer Voices panel at HEY Day, an event about the LGBTQIA+ youth sector run by the Youth Affairs Council Victoria and the Rainbow Network, in Melbourne.

I interviewed Kate Richards about her recent book Is There No Place For Me? Making Sense of Madness at St Kilda Library, Melbourne, on 4 December 2019.

On 1 December 2019, I moderated a panel at tilde: Melbourne Trans and Gender Diverse Film Festival in Footscray, Melbourne.

I presented the initial findings from my PhD research at the International English Educators’ Symposium (IEES), Write now: Teaching writing in high stakes times, at Monash University, Melbourne on 29 November 2019.

On 22 October 2019, I was a guest on the Triple Bi-Pass show (Joy FM) discussing sex education.

On 13 October 2019, I was interviewed together with Rachel Chapman for the Writes4Women Podcast.

I chaired the panels ‘Inclusive writing about sex and bodies’ and ‘Opening up about mental health’ at the National Young Writers’ Festival in Newcastle, NSW in October 2019.

In September 2019, I presented research findings from the 2018 National Survey of Secondary School Students and Sexual Health at the Australasian Sexual Health Conference in Perth.

On 9 August 2019, Growing Up Queer in Australia was launched at Readings bookshop in Carlton, Melbourne.

On 25 June 2019, I chaired the session ‘The Early Words: Mental Health Through the Arts’ at the Emerging Writers’ Festival in Melbourne.

On 23 June 2019, I was on a panel titled ‘The Politics of Forgetting’ at the National Writers’ Conference in Melbourne.

On 29 April 2019, I presented my PhD research at La Trobe University’s Department of Politics, Media and Philosophy Postgraduate Researcher Mini Conference in Melbourne.

On 31 March 2019, I ran a workshop at the LGBTIQA+ Women’s Day at Bendigo Pride Festival in Bendigo, VIC.

On 26 March 2019, I was the keynote speaker at La Trobe University’s Pride Day at Bundoora campus, Melbourne.

On 1 February 2019, I was on GLOBE’s panel about queer women, non-binary and gender non-conforming writers at Upside Rooftop in Fitzroy, Melbourne.

On 15 December 2018, I was on a panel called ‘Write like Jane’ at Austen Con in Melbourne.

On 6 December 2018, I performed a standup comedy set for the first time at Comedy Thursday at George’s event ‘Try It, Babe!’ in Fitzroy, Melbourne.

On 30 November 2018, the launch of Going Postal: More Than ‘Yes or ‘No’, which my essay appears in, was held at Hares & Hyenas in Fitzroy, Melbourne. 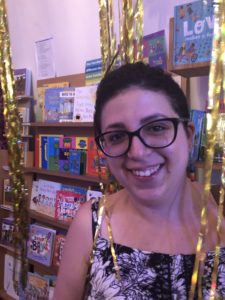 On 23 November 2018, I presented my research at the Queer Legacies, New Solidarities conference, which was organised by Deakin University’s Gender and Sexuality Studies Research Network, the Australian Women’s and Gender Studies Association, and the Australian Lesbian and Gay Archives.

On 9 November 2018, I presented at the conference ‘Talking ’bout iGeneration: Sexual citizenship among diverse sex, sexuality and gender youth’, on behalf of the Australian Research Centre in Sex, Health and Society. The conference was run by Family Planning Victoria, the Australian Forum on Sexuality, Education and Health, Queer Generations, Swinburne University and the University of Western Australia.

On 31 October 2018, I told a story about ‘Problematic Faves’ at Queerstories in Melbourne.

On 30 October 2018, I co-presented with Sam Drummond at a media training session for LGBTIQ advocates for the Education Equality Alliance.

On 21 October 2018, I ran a workshop on memoir writing at She’ela Festival in Melbourne.

In October 2018, I co-facilitated a workshop on writing about music for Banyule Council with writer Giselle Au-Nhien Nguyen.

In September 2018, I read an excerpt from my essay ‘My Helmet’ at the launch of Living and loving in diversity: An anthology of Australian multicultural queer adventures, the Australian GLBTIQ Multicultural Council’s book (Wakefield Press) at St Kilda Town Hall. I ran a writing workshop at the AGMC’s National Conference, and I chaired three panels (‘Black and brown queers: Pushing back on the whiteness of multiculturalism’, ‘A stance of ‘not knowing’ and ‘Unpacking whiteness in LGBTIQ inclusivity: The road to intersectionality’).

In September 2018, I presented at The Pleasure Research Agenda, an event run by the Australian Research Centre in Sex, Health and Society and Family Planning Victoria.

I was a guest judge for the 2018 LGBTQ+ #SweekPride Writing Contest. The winners will be announced on 17 September 2018.

In July 2018, I ran a workshop on journalism and nonfiction writing for Banyule Council’s youth services writing group with author Madison Griffiths.

On 17 June 2018, I was a presenter on a panel titled ‘Out loud: LGBTQI+ experiences in the Jewish community’ at Yom Limmud at the University of New South Wales in Sydney, NSW.

On 15 June 2018, I presented on behalf of the Australian Research Centre in Sex, Health and Society at Pleasure and Health: A Colloquium at Flinders University in Adelaide, SA.

In April 2018, I appeared on a panel about queer representation in popular culture for young adults with Rachel Chapman, Elaine Atwell and Amy Spalding at ClexaCon: A Media & Entertainment Convention for LGBTQ Women and Allies in Las Vegas, U.S.A.

On 30 November 2017, I read an excerpt of my memoir at Words on the Street, an event run by Darebin Writers Date, in Northcote, Melbourne.

On 15 November 2017, I was interviewed by Robbie Buck on ABC Radio Sydney about my article for Huffington Post.

On 11 November 2017, I presented at the Australian Lesbian and Gay Archives’ 17th Australian Homosexual Histories Conference, held at the University of Adelaide, SA.

On 8 October 2017, I was interviewed about my writing by Anthony Lekkas from Bent TV (Channel 31).

On 17 and 24 September 2017, I performed at Church (Melbourne Fringe Festival) at Fringe Hub, Melbourne.

On 16 September 2017, I read an excerpt of my memoir at ‘YES: A fundraising, hoperaising performance party’ organised by Mama Alto and Hares & Hyenas in Fitzroy, Melbourne.

In June 2017, I appeared at the Emerging Writers’ Festival in Melbourne on a panel about The Female Gaze.

In May and June 2017, my writing was exhibited in Going Down Swinging‘s cross-continental exhibition and publication Return Flight MEL>EDI. The exhibition was launched at the Atrium in Federation Square in Melbourne in May and at The Number Shop gallery in Edinburgh in June.

In December 2016, I presented my research on using creative nonfiction to promote young people’s wellbeing at the Youth, Health and Practical Justice Conference in Sydney, organised by the UNSW Practical Justice Initiative and the UTS Faculty of Health. I also co-presented an academic poster with Rachel Chapman, who is doing important research on educators’ understanding of gender in early childhood education and how this impacts on young children.

I’m October 2016, I performed a piece on sex and grief at ‘Dirty Deeds: Flash Fiction’ at Hares & Hyenas in Fitzroy, Melbourne.

In August 2016, I was a panelist speaking at an event titled ‘Out at Work: Networking Forum for LGBTI+ and Allies’, which was run by the Australian Education Union in Abbotsford, Melbourne.

In October 2015, I was an artist at the National Young Writers’ Festival in Newcastle, NSW. I chaired a panel on queer writing, and was on a panel about memoir and the family.