I’m a PhD candidate at the Australian Research Centre in Sex, Health and Society, which is based at La Trobe University, and I’m really excited to get started with my research project. I’m researching the impact of life writing on young LGBT+ people.

My research study is open to anyone aged 16-20 who lives in Melbourne and identifies as lesbian, gay, bisexual and/or queer (all genders welcome). Involvement includes attending a writing workshop, filling in a brief survey, and submitting short pieces of writing in response to prompts.

If that describes you or someone you know, please email me to get involved or share the flyer below!

There’s a necessary grieving period after certain elections. There’s nothing like conservatives winning an “unwinnable” election to remind you of your priorities, values and hopes. But it can take a bit of time before you’re ready to take action.

I found myself suffering from an election hangover that lasted for a week with no alcohol or illegal drugs involved. I got sick and had to take time off. I listened to a lot of Kate Bush, Lizzo, Halsey, Taylor Swift and Kanye West, and hugged my wife and our dogs.

It’s hard to pinpoint exactly what caused the ‘hangover’.

It could have been the Tweets about the multiple self-harm and suicide attempts amongst refugees and asylum seekers on Manus Island and Nauru since the election. Alternatively, it could have been hearing from friends about their children’s terror – about climate catastrophe, about their safety, about their futures. Maybe it was hearing the fears of Aboriginal and Torres Strait Islander people, people of colour, queer people, transgender and gender diverse people, poor people, women, and those from other marginalised communities. Maybe it was reading about some people’s total disregard for human rights and animal rights.

I’m not ‘over’ my hangover but I am ready to show up again, as an activist and as a writer.

I returned to my manuscript of the memoir I have been working on for a few years. It has changed so much in that time. Even though I wanted to have a published book earlier, I realise now that it wasn’t time yet. There’s a lot that I can add now and can explore with more complexity. It’s a book about mental illness, the gender binary and queer identity. All of these issues have a lot at stake as the popularity of far-right and fascist politics grows.

It’s also time to return to freelance writing about political issues. I don’t even know where to begin – there are so many issues to address – but I suppose I can start anywhere.

At the moment, I’m writing, editing, thinking and plotting with a fresh and furious post-election lens.

Ultimately, I’m ready for action, even though I’m tired and sick (and sick and tired). Who’s with me?

Check out the panel that I got to be part of last weekend at the Queer Legacies, New Solidarities conference. I can’t think of a better panel and audience than all the amazing queers in the room on Saturday. 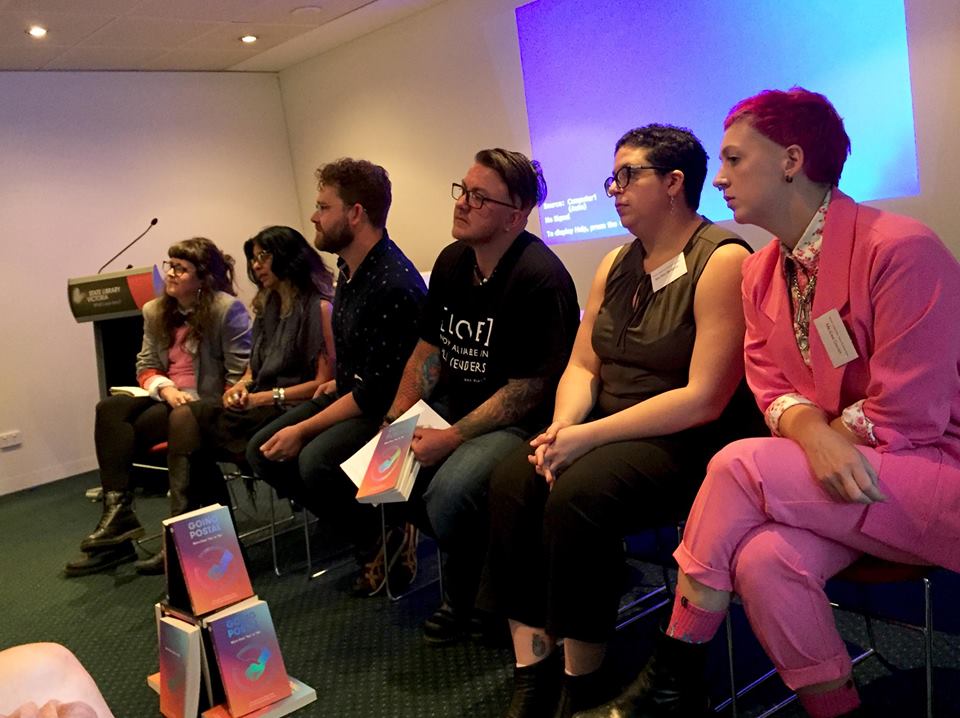 The book will be launched at Hares & Hyenas on Friday 30th November. It will be a family-friendly event that centres kids and young people (since they were greatly affected by the postal survey in 2017). I’d love to see you there!

Last night was incredibly exciting for me (and not just because it was Halloween). I told a story at Queerstories, which is one of my favourite events in the LGBTIQA+ community.

My story was titled ‘Problematic Faves’. I spoke about Enid Blyton, The X-Files, The L Word, Homeland and many others. I got to drool over my favourite characters in front of an understanding  and supportive audience.

My wife, Rachel, was sitting up there front and centre. I couldn’t see anything because of the bright lights except for her gorgeous smiling face, which was ideal. Also, my beautiful family and friends were there in the audience. Thank you all so much for coming! <3

Also, the night was made even better by the fact that I was part of a dream line up of queer dreamboats: Yen Eriksen, Charles O’Grady, Tara Suamba, Marisa Wikramanayake, Geraldine Hickey and Maeve Marsden. 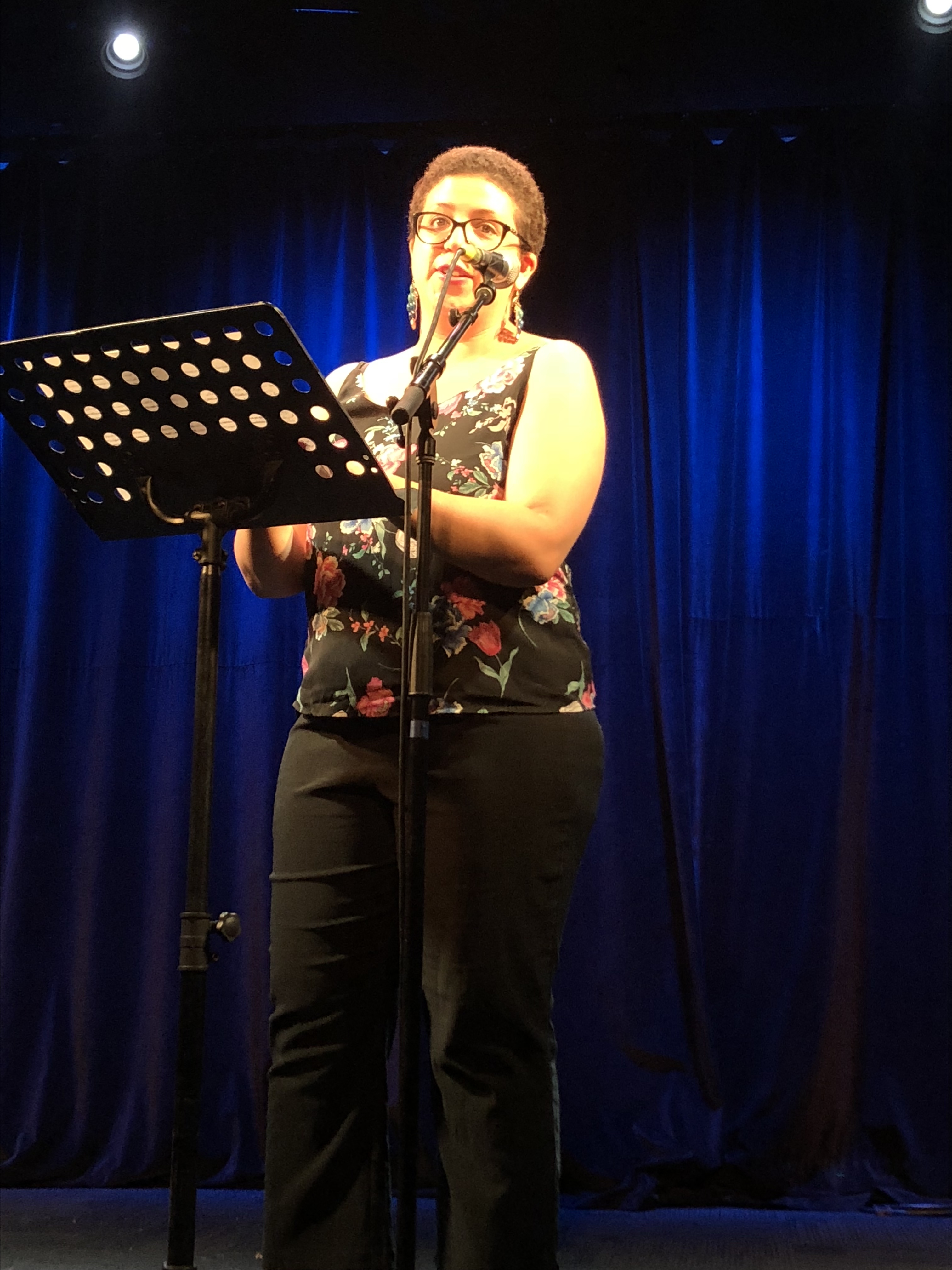 You will be able to listen to my story and all the others on the Queerstories podcast soon! Make sure you subscribe and listen to the other amazing stories.

I was invited to present on a panel at La Trobe University’s Open Access Week by La Trobe University Library’s Senior Learning Advisor Clare O’Hanlon. If you want to know more about Open Access, and some of the issues associated with equity in higher education and research, Clare wrote a wonderful post that I highly recommend reading.

I spoke about Open Access in relation to the three main disciplines I work and research in: education, sexual health, and writing/journalism. I discussed how access to research can impact on various populations, including the most marginalised, and what editors and ‘gatekeepers’ of knowledge could do differently to ensure research reaches its intended audience. 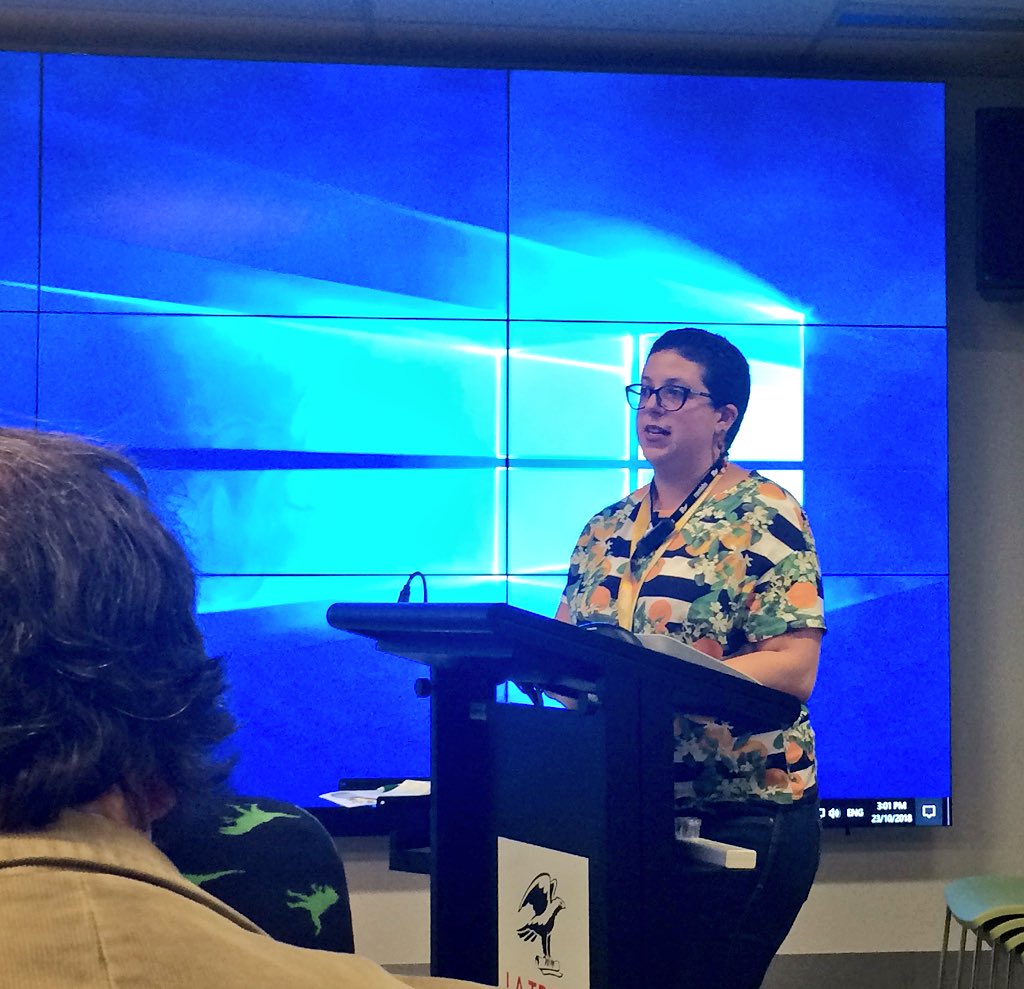 Photo taken by Dr Tseen Khoo of The Research Whisperer

I really enjoyed having the opportunity to get down and nerdy with other academics, researchers and librarians on this year’s theme, Designing Equitable Foundations for Open Knowledge. It was great to talk to Lauren Gawne and Paul Kelly about our research and thoughts on possible future directions for Open Access.

I am looking forward to seeing what discussions and research emerges in response to these events!

I am really honoured to be a finalist in the artist category for the Australian LGBTI Awards 2019. Voting has opened for the awards, and I’d really appreciate it if you would register and vote for me.

The Awards will take place at The Star Event Centre on Friday 1 March 2019.

Thank you so much to those who nominated me and to everyone who votes for me! 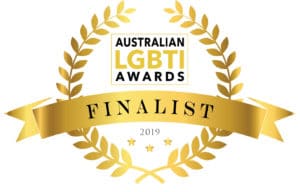 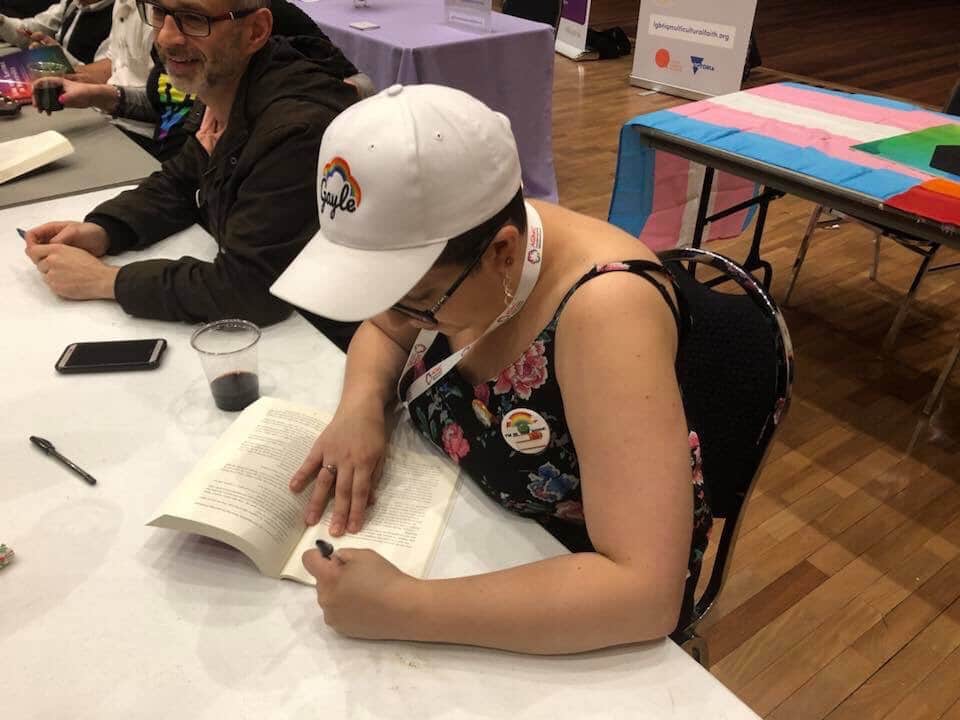 ‘Living and Loving in Diversity’ was launched this Friday at the Australian GLBTIQ Multicultural Council’s national conference. It is an honour to be part of a book that contains writing from so many amazing queer writers. I read an excerpt of my piece, ‘My Helmet’, at the launch, and had the opportunity to sign books for the first time in my life. It was very thrilling!

You can buy the book through Hares and Hyenas, Fitzroy, and directly through the publisher, Wakefield Press.

My essay about my complex relationship with my hair (and its links to ethnicity, religion and trauma) has been published in the Australian GLBTIQ Multicultural Council’s amazing book, Living and Loving in Diversity: An anthology of Australian multicultural queer adventures. The book was launched on 21 September at St Kilda Town Hall. 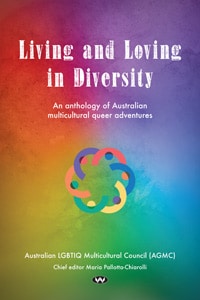 I wrote an op-ed for Ten Daily about Scott Morrison’s comments on-air with Alan Jones and Neil Mitchell yesterday. These conservative men may think they are being subtle, but the homophobia, biphobia, transphobia and slut-shaming is evident in their words.

Jones took umbrage at one exercise in the curriculum in which students use character cards and role-play various scenarios related to sexual health, relationships, sexuality and gender. He referred to two of the characters that students have to role-play. The first is 17-year-old “Megan” who has had 15 sexual partners and describes herself as bisexual. The other character he referred to, “Kelly”, is 14 and thinks she might be a lesbian.

Clearly, Jones did not take similar offence at some of the other characters detailed in the curriculum, such as “Reece”, a 16-year-old boy who engages in consensual sex with girls, mostly within the context of relationships, or “Steven”, a committed Christian who believes sex should take place within the context of marriage.

Jones told Morrison that “all this is going on in the classroom” and asked him if it made his skin curl. Morrison replied, “It does, Alan.”

The takeaway? Some of these leaders should actually read the curriculum and learn a bit more about these programs and resources to find out what is taught in our classrooms, rather than always being reactive and hysterical. 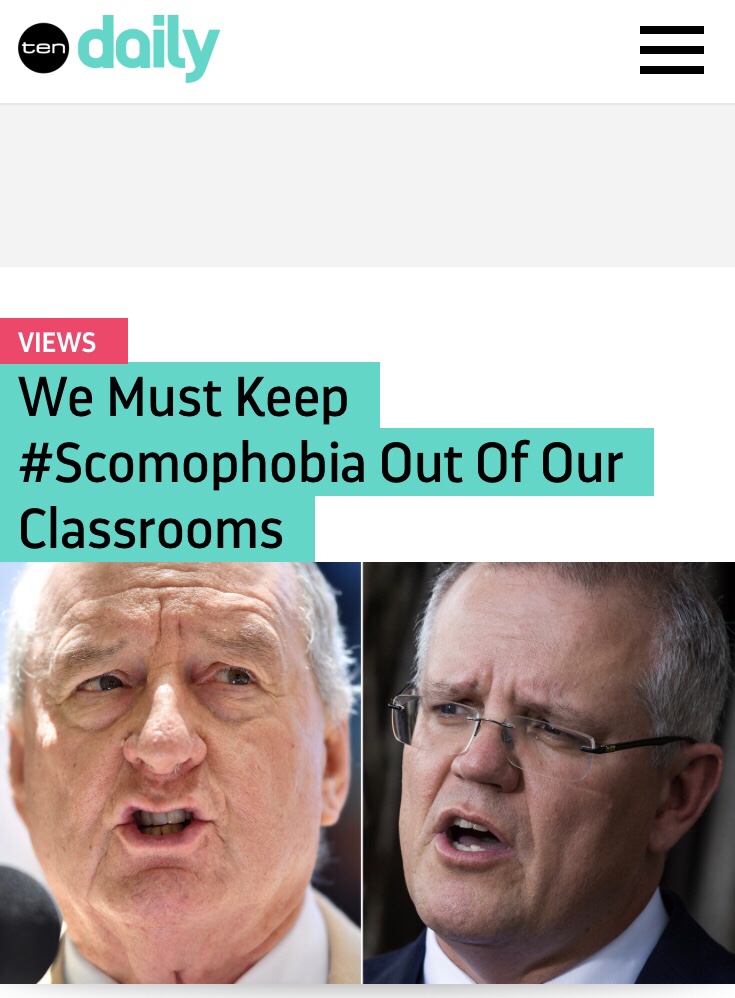 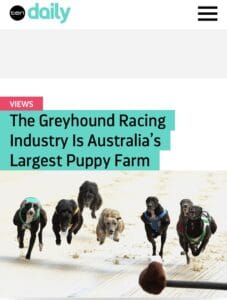 I wrote an op-ed on greyhound racing and welfare for Ten Daily. I was very fortunate to have the opportunity to interview Amber Cullinan, Adoptions Coordinator for Greyhound Rescue Victoria, and Martina Best, the Founder and Managing Director of Amazing Greys who shared their insights on the industry.

Check out my article and the amazing video Channel Ten produced here.